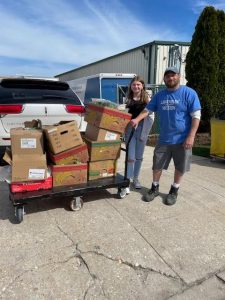 After witnessing community members in need waiting on long lines for food donations, Westhampton Beach High School student Madison Esposito decided that she was going to step up and make a difference. That was five years ago. Since then, she has worked to donate hundreds of food items to Lighthouse Mission in Bellport.

Esposito started her effort by recycling bottles to raise funds to purchase food for the nonprofit organization and has since increased her efforts. She now works closely with King Kullen in Eastport to collect food that would otherwise be thrown away. Through that partnership, she has been able to donate 115 boxes of produce — including bananas, potatoes, peppers, artichokes and lettuce greens — to Lighthouse Mission this school year.

Esposito hopes that her work will inspire others to help those in need through Lighthouse Mission, which has several outreach trucks that provide food at 10 locations throughout Suffolk County.

When not collecting food, Esposito, an honor roll student, participates in her school’s Key Club and Art Club. She is also an avid equestrian, having started riding at the age of 4, and is a former Girl Scout.