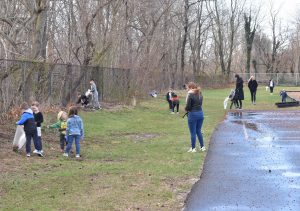 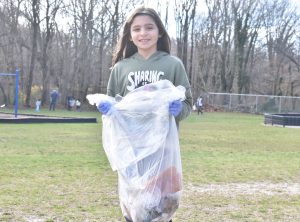 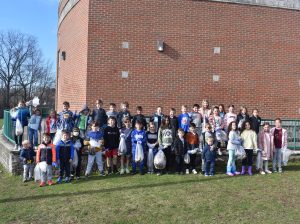 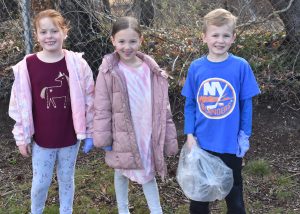 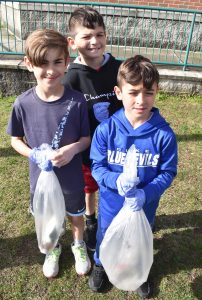 About three dozen environmentally conscious students arrived early at Forest Lake Elementary School in the Wantagh School District on April 8 for some good old fashioned spring cleaning. By the time classes started, they had filled several bags with litter found around the back of the school.

Principal Jessica Zimmer said the idea was brought to her by second grader Avery Cohen, who had noticed some trash during a weekend walk with her father. Avery wrote a letter and put it in Ms. Zimmer’s suggestion mailbox.

“I try to say ‘yes’ to whatever I can, because I want students to have a say in their school,” Ms. Zimmer said, noting that Avery’s suggestion was a great idea with Earth Day coming up later in the month.

Students were joined by parents and younger siblings to spruce up the property for about a half-hour on a sunny Friday morning. Avery did her part to spread the word by making posters that were hung around the school. She and her brother, Braden, a fourth grader, also made a video that her parents shared on Facebook.

1: More than 30 students from Forest Lake Elementary School helped picked up garbage in the back of the school on April 8 for a spring clean-up.

2: The idea for the clean-up came from second grader Avery Cohen.

3: Students and their parents had plastic bags and gloves as they removed litter.

4: Liam Zaikowski and his mother, Andrea Hines, were among the volunteers.

6: First graders, from left, Avery Griffin, Peyton Ellis and Luke Messer got to work to spruce up the Forest Lake grounds.