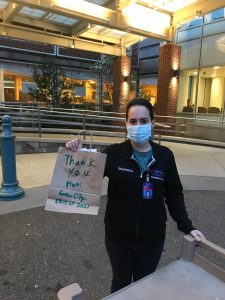 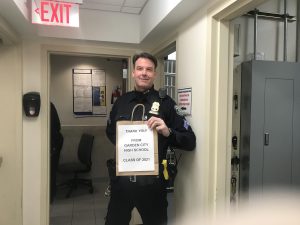 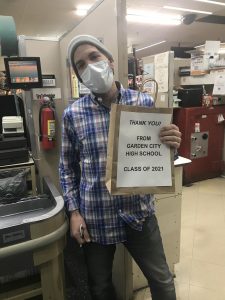 Kudos to Garden City High School junior and 2021 class president Tim O’Hanlon. While this is an unsettling time for all, Tim isn’t allowing the current situation to stop him from doing good for others.

“Typically, junior year is dedicated to building résumés, visiting colleges and preparing for SATs, ACTs and New York State Regents exams,” said Garden City High School Class of  2021 faculty sponsor Allison Moss. “As we all know, this is not a typical year. Juniors, like the rest of us, have put everything on hold while still trying to complete their assignments remotely.”

Tim thought of a way for his peers in the Class of 2021 to shift their focus and work together to show appreciation to the health care workers and others working the front lines during the crisis. He asked his classmates to write a letter, a “quick note to the people who are working so hard during this difficult time.” Tim also asked his classmates to consider writing to COVID-19 patients who are not allowed visitors.

“This is an easy way for our class to come together to do some good, even though we are not together in school,” said Tim, who asked classmates to email him notes to print and compile for distribution. Moss has also helped Tim to get the word out.

Class members are answering the call. After less than a week of the campaign, letters have already been delivered to the Garden City Police Department, Key Food of Garden City and NYU Winthrop Hospital. Tim and Moss are hopeful more will follow.

“Thank you to everyone for sending in letters!” Tim said. “Please keep them coming. Some have been long, some only a few lines.  Your note does not have to be long. A few lines are great. Let’s keep this going!”