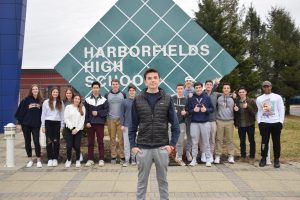 Harborfields Fighters are taking a stand against cancer. Led my Harborfields High School student Andrew Gonzalez, the group is participating in a seven-week competition against other Long Island Schools to raise money for the Leukemia and Lymphoma Society’s Long Island chapter.

Andrew was inspired to create the group, noting that both his mother and aunt are cancer survivors. Additionally, he said that the high school was deeply affected by the recent passing of Gabrielle Cava, who lost her fight against Signet Ring Cell Carcinoma on Jan. 12.

The group’s goal is to raise $100,000 for the Leukemia and Lymphoma Society through sending emails, asking family, friends and community members to donate to the cause. Since kicking off their fundraiser last Sunday, the group has raised more than $2,000.

Groups that raise $5,000 or more will receive a college letter of recommendation from the society. Andrew added that he will also reflect on his time as a Harborfields Fighter when it comes time to write his college entrance letter.

Andrew has also been nominated as a candidate for Student of the Year by the society’s Long Island chapter.

“It’s part of a great cause and I’m just trying to be an advocate for change,” Andrew said.