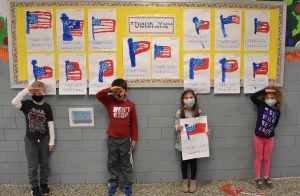 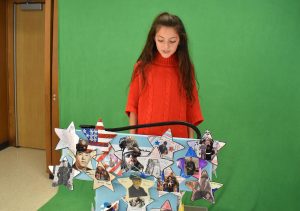 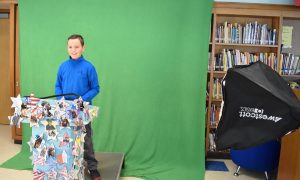 Although an in-person Veterans Day ceremony could not be held this year, Lockhart Elementary School upheld its long-standing tradition of honoring the men and women who proudly served the United States.

Students and staff were featured in a 27-minute video paying tribute to all veterans that was shared on Lockhart’s homepage on the Massapequa School District website. It was created by Spanish teacher Stacy Incardona and computer teaching assistant Stephanie O’Hara. Following an introduction by Principal Dr. Michael Yannucci, security guard Jim Psomas, a Navy veteran, led the Pledge of Allegiance next to the school’s flagpole. Ninth grader Cooper Arbisi, a Lockhart graduate, then sang the national anthem.

Student representatives from fourth and fifth grade classes recorded their remarks in front of a green screen, with the final video featuring them giving their speeches in front of a waving American flag. They discussed the history of Veterans Day and well as its meaning and traditions, explained who a veteran is and listed the different branches of the military. The podium they spoke from was covered in stars that students made in honor of veterans in their families.

1: Lockhart Elementary School fifth grader Nicholas Cordero was one of the student speakers in a Veterans Day video that was shared with the Massapequa community.

2: Fourth grader Lucia DiNello spoke about the significance of Veterans Day in front of the green screen in the library.