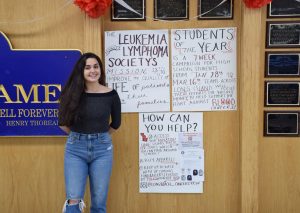 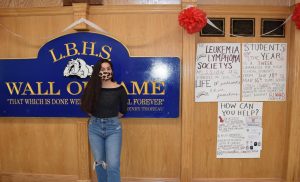 Long Beach High School junior Natalia Hakimzadeh is on a mission to make a difference as a candidate for the Leukemia & Lymphoma Society’s 2021 Long Island Student of the Year program. She has rallied a team of approximately 15 classmates dubbed the LB Cancer Crew, and they are working together to fulfill a $20,000 fundraising goal.

Students of the Year is a seven-week fundraising campaign for highly driven students. From Jan. 28 to March 16, a total of 28 teams across Long Island are focusing their efforts on raising money to help support the fight against blood cancers such as leukemia, lymphoma and myeloma. With the money raised through Students of the Year, the organization invests in groundbreaking research to help save lives and improve the quality of life for those who are living with or are in remission from cancer.

Natalia recruited team members by reaching out to friends and posting flyers around the schools. She is involved in numerous clubs and promoted the opportunity during their Zoom meetings. Thus, the LB Cancer Crew was formed and now meets remotely every other week to brainstorm ideas for events.

The team has already raised approximately $14,000 through members’ dedication and creativity. Despite the challenges of the pandemic, which limits fundraising opportunities to those that can primarily be conducted virtually, Natalia and her teammates have developed a variety of initiatives geared toward their goal. They organized fundraisers with Panera and Chipotle restaurants, as well as a Superbowl Square effort, and will hold raffles thanks to donations from local businesses. They have other plans in the works and are taking advantage of the connections that social media offers.

Students Jasmine Soriano and Robin Xiao contributed their artistic talents and designed a logo for apparel that is being sold through Long Island Athletic. Each team member additionally created their own fundraising website and has reached out to friends and family members. They are all gaining valuable professional skills such as those in networking, communication, goal-setting project management that will be useful in college and beyond.

“I want us to have an impact and for students to take action,” Natalia said. “It’s also an amazing experience to communicate with others and correspond with businesses.”

This is the first time that Long Beach High School has been involved in the campaign. Natalia was nominated by Assistant Principal Dr. Francine Newman, who recognized her extraordinary leadership skills and altruistic attitude.

Natalia discovered her passion for helping others in eighth grade when she was involved in a charity walk for Cohen Children’s Hospital. In addition to her commitment to the Student of the Year program, Natalia serves as secretary in Student Organization and is a member of the soccer team, Key Club and National Honor Society. She is also an International Diploma Program Candidate and hopes to eventually pursue the pre-medical route with a focus on pediatrics.