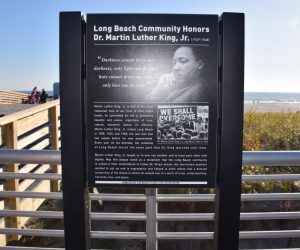 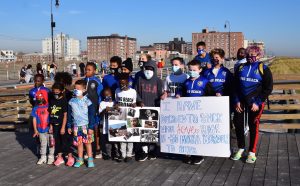 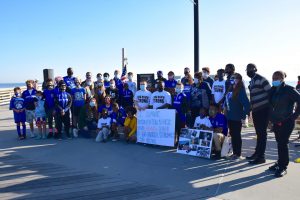 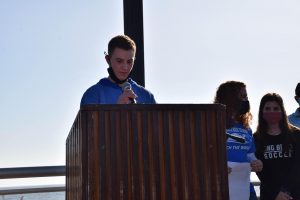 In a collaborative effort with several other community entities and individuals, the Long Beach Public Schools dedicated a plaque honoring Dr. Martin Luther King Jr. on the boardwalk at Riverside Boulevard. The project was developed with input from Long Beach High School students as a way to signify unity and celebrate diversity in the community.

“It’s going to be their community forever,” said teacher and LB United adviser Geoffrey Noss. “It’s one thing that will stick with them for the rest of their lives.”

“We wanted to get as many different parts of Long Beach involved as we could,” said student Theresa Tarantino.

Although attendance at the Nov. 7 plaque unveiling was limited due to COVID-19,  a small group of the involved parties was invited to view the plaque and celebrate and share reflections on the boardwalk. The event was livestreamed for those unable to participate in person, and Long Beach High School students led a ceremony that highlighted the plaque’s significance and Dr. King’s impact on their own lives, the community and the nation.

“It represents the equality and diversity shown in Long Beach, the importance in being together as one,” said student Maura Conway.

Students took turns at the podium and discussed Dr. King’s legacy and his visits to Long Beach in the 1960s. They described the diversity and equality in the community and acknowledged the ways that Long Beach embraces and exemplifies Dr. King’s principles.

Attendees applauded as the plaque was revealed, and Natalia Hakimzadeh, one of the student speakers, sang the famous John Lennon song, “Imagine.”

“We are the next generation of leaders and activists,” Hakimzadeh said. “We the children have grown in a community that fosters the growth of tolerance through love and respect. We must set the example for future generations and show them how we hold hands and embrace our differences.”

1, 2: A small ceremony was held on the boardwalk at Riverside, where Long Beach students and community groups dedicated a plaque in honor of Dr. Martin Luther King Jr.

3 & 4: The plaque was unveiled for all to remember the impact of Dr. Martin Luther King Jr.