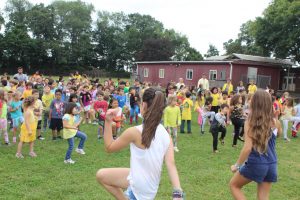 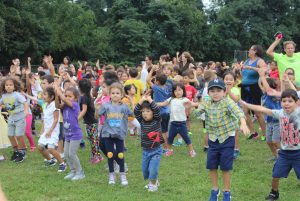 In recognition of Childhood Cancer Awareness Month held in September, every student at Manorhaven Elementary School in Port Washington met on the school field on Wednesday, Sept. 20 at the end of the day to take a unified “whip” at cancer. Approximately 500 students and staff members performed the Whip the Nae Nae dance to an audio recording of the popular song by Silentó called “Watch Me (Whip Nae Nae),” to raise money for pediatric cancer research through the Whip Pediatric Cancer initiative.

Alongside student leaders, Manorhaven physical education teacher Megaera Regan and third-grade teacher Stacey Drucker led the group in the Whip the Nae Nae dance, which was made popular through the chart-topping song. Shortly after the song “Watch Me” caught on in 2015, Whip Pediatric Cancer was launched to encourage people in communities throughout the country to ‘donate for a dance’ in an effort to “whip” children’s cancer. This is the third consecutive year that Manorhaven has performed Whip the Nae Nae in support of the program, but the first in which every class performed together, side by side, on the field.

A collection bucket was placed just outside Drucker’s classroom for students and staff to make donations throughout the month of September. Students and adults collected loose change but also secured donations through pledges to participate in the dance. All proceeds from Manorhaven’s Whip the Nae Nae dance are being donated to Memorial Sloan Kettering Pediatric Cancer Center through the Whip Pediatric Cancer initiative. To learn more, go to https://whippediatriccancer.org/

“Manorhaven’s dedication to Whip Pediatric Cancer is a win all around for everyone involved,” said Superintendent of Schools Dr. Kathleen Mooney. “Young students learn the value of dedicating their time to a lifesaving cause that will help improve and save the lives of other children, many of whom are their own age. They also get some bonus time outside on a nice day, showing off their creative moves while exercising, adding to the already plentiful regime of positive physical activity the school provides. I applaud Principal [Bonni] Cohen, Ms. Drucker, Ms. Regan, and all of the staff and students, as well as families and community members, who contributed their time and money to this wonderful effort.”