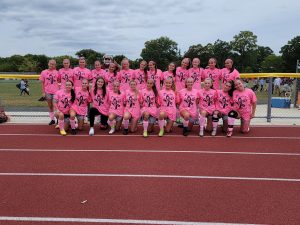 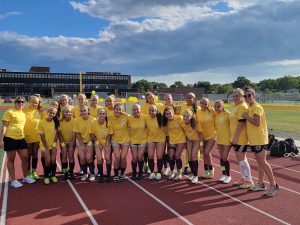 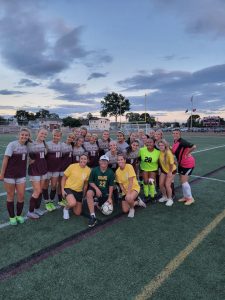 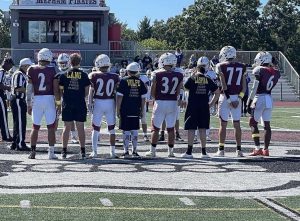 Some of Wellington C. Mepham High School’s athletic programs hosted various events to continue the fight against pediatric cancer and breast cancer during their fall season.

“The girls soccer team had a unique situation where two members of the varsity soccer team have a brother who was diagnosed with stage 4 cancer,” explained varsity girls soccer coach Janine Bizelia. “As an eighth grader in the district, the girls dedicated one of their games to Carsyn Volpe’s fight against cancer.”

The girls designed yellow T-shirts with his name on them and called Volpe to come out at the end of the game to take photos.

“He is an amazing young man who is fighting each day to have some sense of normalcy,” added Dr. William Murphy, Mepham’s athletic coordinator.

“We also had three game captains from the community represent the program at the pregame coin toss,” explained varsity football coach Matt Moody. “Each of the honorary game captains; Luke Lang, Robert LaSpina and Carsyn Volpe were either cancer survivors or were currently battling cancer.”

The boys remained on the sideline for the entire game and the announcer introduced each of the boys while providing a short biography during the game.

The Mepham Football Program will also be donating a portion of their proceeds from their annual homecoming T-shirt sales to pediatric cancer research.

Collectively they raised more than $3,000 so far.