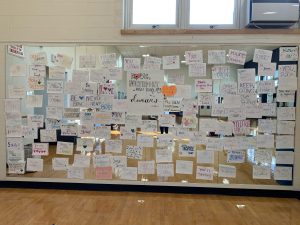 Despite gathering and event limitations, Northport High School’s Tigerettes and Intro to Dance students still managed to spread messages of positivity with the patients Cohen’s Children’s Hospital. The students’ dance performances were taped and then broadcasted by the hospital to lift patients’ spirits during the holiday season.

Each year, members of the Tigerettes and coach Kaylie LaLota pay a visit to the hospital to perform. Since in-person visits are not allowed at this time, they instead videotaped a performance choreographed by captains Brianne Chave, Grace Keating, Alexis McCreight and Erin Munson to be shared with the patients. The Tigerettes are also hosting a toy drive for the patients, led by Ella Lombardo.

Rather than leave it at that, Kaylie LaLota enlisted the help of her Intro to Dance students to create a second lyrical dance video. The dance, originally choregraphed as a flash mob for World Kindness Week by Life Vest Inside, was performed by the various Intro to Dance classes and then compiled into a second video. Art teacher Pete May, along with students Dessa Kavrakis and Shane McGlone, edited the video so that students on varying hybrid days could both participate.  Students also created signs with positive messages which were shown at the end of the video.

“During this unit students were taught personal and social responsibility as well as learning how movement can be used to express a deeper meaning,” shared Dance Teacher and Tigerettes Captain Kaylie LaLota. “Research suggests that students gain cognitive benefits from coordinated movements such a dance, which is a lifetime physical activity. Additionally, empathy, social awareness, performance skills, critical thinking skills and reflective practice were demonstrated.”