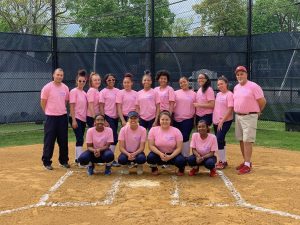 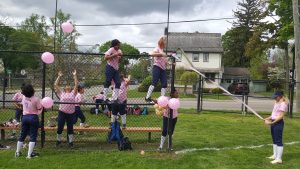 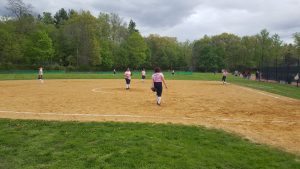 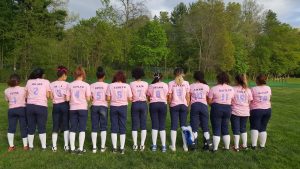 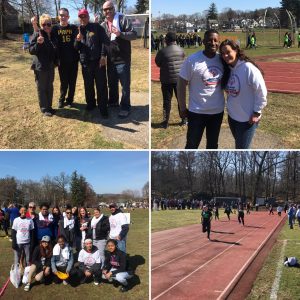 The Softball Program recently volunteered for the Mid-Hudson Valley Special Olympics,  Track Time Trials.  Those athletes who qualify go on to compete in the summer Special Olympics at West Point. The event is coordinated by the middle school Physical Education Teachers, Cami Basso.  This was the fourth year Peekskill hosted this event.  The softball teams in Peekskill (Modified, JV, and Varsity) volunteered to help out at this event which was held on April 6th, 2019.  Approximately thirty players and coaches joined a hundred of other students, athletes, staff members and community members in helping record times, assisting judges, and being cheerleaders for the amazing athletes competing.  Volunteers began showing up at 8:00 am and stayed until 12:30 when the event began to wrap up.
The varsity softball team also participated in Section 1 softball’s Strikeout Breast Cancer fundraiser and awareness campaign.  On May 6th, the team “pinked out” the field and their uniforms.  Tee Time Shirt Company donated the Pink
Game shirts with the girls’ names and numbers on them.  The team also took it upon themselves to decorate the field with balloons, signs, and ribbons.  The girls also raised money to donate to Breast Cancer by selling raffle tickets.  Proceeds go to the Susan G. Komen  Breast Cancer Foundation.  The team recognizes the impact that Breast Cancer has on so many lives and was eager to be a part of this fundraiser.  This is the fourth year the team has taken part in the Breast Cancer Awareness campaign and hopes to continue it in the future.
The Peekskill Softball Teams COmmunity service efforts have been share din teh NYSPHSAA Community Service Challenge: https://www.teamup4community.org/nysphsaa