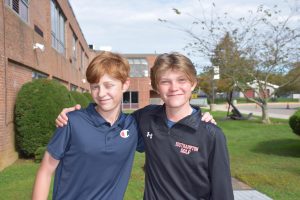 Toting a camera, two Southampton High School sophomores set out over the summer to film a promotional video that would eventually win them a Land Rover for the nonprofit Hampton Community Outreach program.

Wyatt Race and Ronan Brady said when they learned about Land Rover’s Defender Above and Beyond Service Awards contest, they decided this was something they could get behind. What they couldn’t believe was that they were one of eight entrants to win the Land Rover.

“It was great and very surprising,” said Race.

“It is the best thing that could have happened,” added Brady.

The pair said they filmed their video at several locations on a sunny summer afternoon and then spent the next two days editing it. The video features the work that the Hampton Community Outreach program provides to the Hamptons community in need, including emergency home repair services. The Land Rover will assist the nonprofit with the transportation of equipment and volunteers.

This is not the first time that the sophomores have stepped up to volunteer their time for the program. In the past, they helped with a diaper drive. They plan to continue their philanthropic efforts.

The Southampton School District congratulates both students on a job well done.

To view the video, visit: https://www.landroverusa.com/experiences/events-and-sponsorships/defender-service-awards/winners.html

Photo caption: Wyatt Race and Ronan Brady won a Land Rover for the Hampton Community Outreach program by creating a promotional video over the summer.