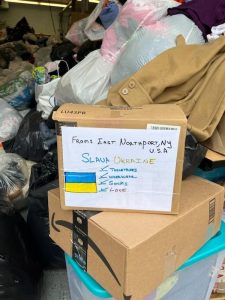 When the district announced that schools can accept donations for Ukrainian refugees, members of the Northport-East Northport community stepped up to the plate. Thus far, the high school food pantry has donated more than 1,000 pounds of food. Additionally, 20 bags of clothing and 40 bags of medical supplies and toiletries have been donated, which are being dispersed to a Ukrainian church and the Suffolk County collection site organized by Executive Steve Bellone.

The incredible display of charity was organized by high school IB student Rob Rada, who helped organize and create awareness around the donations. Northport Middle School teacher Katy Durand also had a hand in the collections, helping organize the clothing donation to a Ukrainian church in New Jersey.

The Northport-East Northport School District also arranged a monetary donation site through the UNICEF refugee program, which has raised more than $1,800 thus far.

The collection began in early March and is ongoing. Students began packing the bags of items into a truck, which will be returning as the donations were so abundant, it will need to make two trips.

Photo caption: A box of donations from the Northport Middle School community for Ukrainian refugees showed it included toiletries, underwear, socks and love.